skip to main | skip to sidebar

Finishing Tapestry with Hem or Turn-back

Once upon a time someone asked me about hems or turn-backs as finishing steps for tapestry.  I delayed answering because at the time I hadn't been using that method for finishing very often.  However, in the last year I've done turn-backs with several pieces.  I photographed the steps I took on the last one (the landscape shown in the previous post) and so here's my take on using a hem or turn-back.

When doing the hem or turn-back I use a suggestion from Barbara Heller and weave several slits across the width of the piece so that the turn-back area won't pull in at the edges.  I usually make the slits 3" to  8" across, more or less, depending on the width of the whole piece.  On the 19" wide landscape I made two slits at each edge as I wove the 1" wide turn-back (on a larger piece I make that a bit wider): 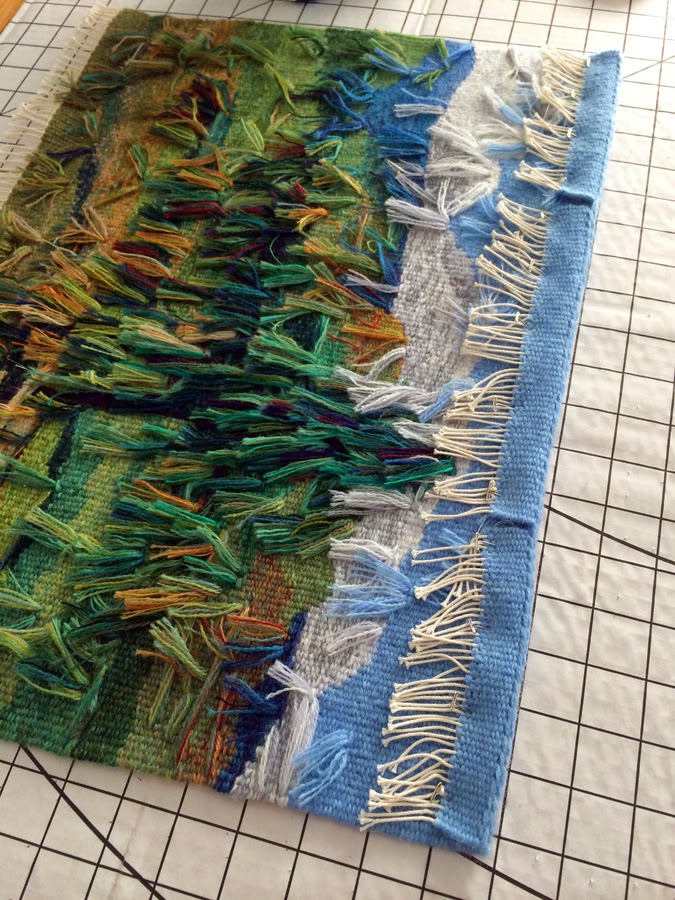 Above is the piece laid out on the grid board.  Weft ends have been trimmed and the piece has been steam pressed (I didn't block* it, just gave it a pressing using steam in the iron and a dampened press cloth on top).  The turn-backs were finger pressed down and T-pinned, then steam pressed and left overnight.

Next, I basted the turn-back using regular sewing thread and a big running stitch, removing the T-pins as I did that:

Once both sides were basted, I stitched down the turn-back using a tapestry needle and a tiny stitch that caught only a little of the weft at the back of the tapestry.  Since this piece will be mounted onto a fabric covered board I don't need the turn-back tacked down more than that. 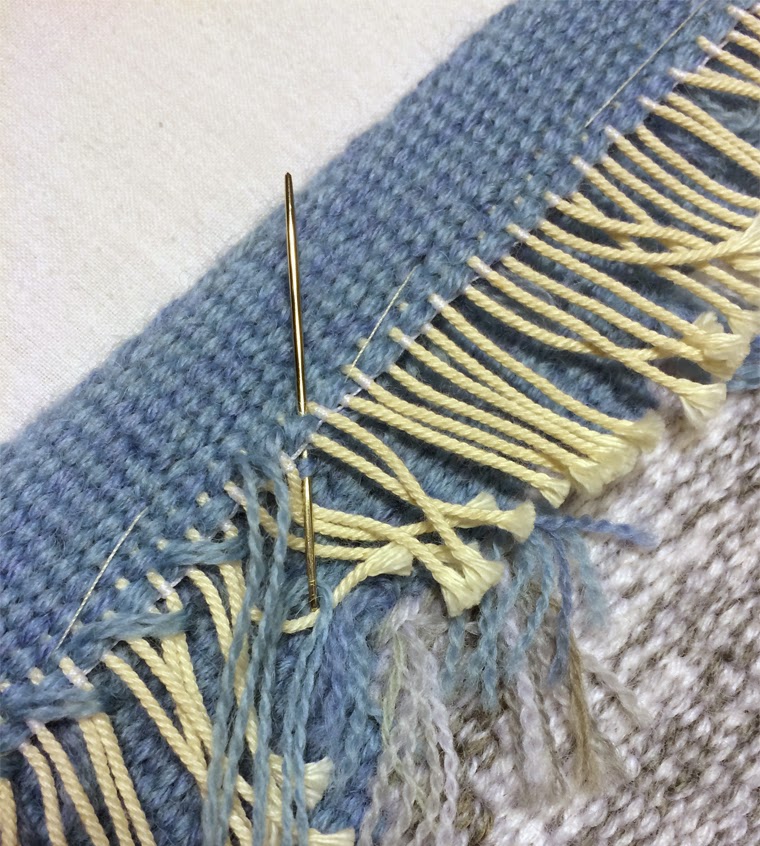 The white thread in the big running stitches is the basting thread that is to be removed at the end.  I'm stitching down the turn-back using a double strand of the same yarn as used in the weft.  You can see that I'm only catching a bit of the weft and then coming through near the edge of the turn-back.  The stitches are about 1/4" apart.  Other times I have used a regular sewing thread to stitch down the turn-back instead of weft.

Finished turn-backs on both top and bottom; I've trimmed the warp ends a bit more and left them about 3/4" long: 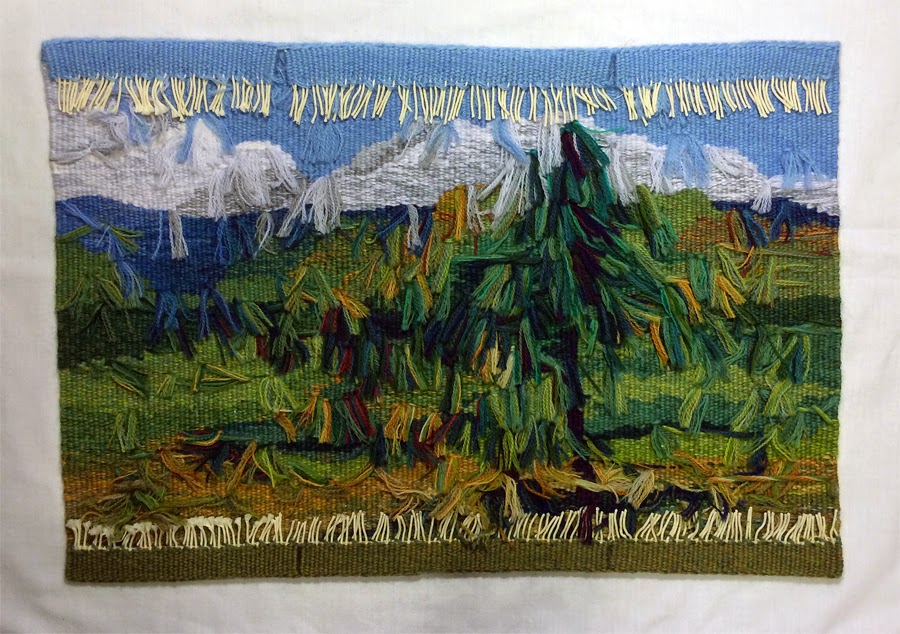 Soon I'll post about the next finishing steps for this piece.  It will be much like what I've shown before when I've mounted small tapestries on a fabric covered board as described in this post.

*Kathy Spoering wrote a great post about blocking at her blog--find it at this link.  I don't always block tapestries but when I do I use her suggestions.

To all who've found this blog--Tapestry Share--I began it a few years ago as a private one among several of my students and me (Tommye Scanlin). I opened it for public viewing after about a year and invited a few other people to be authors along with me, folks who have been my students at some point or who also teach tapestry. Find out more about my work at my blog: http://tapestry13.blogspot.com

Pat Williams, good friend and exceptional tapestry weaver, joins me occasionally to make posts to this blog. Pat will contribute to the conversation with her expertise and her very special humor! Please visit Pat's website to see what I'm talking about.

Teaching and learning about tapestry are very important in my life and also for Pat. We have co-taught several workshops and will be doing more in the future, either at her studio or mine, or in other venues. She and I both appreciate the wonderful teachers we've had in the past and hope to be able to pass on some of the knowledge that's been so generously shared with us. We hope everyone who discovers Tapestry Share finds information to help them along their path of tapestry making.